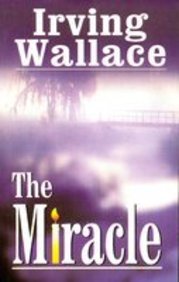 Lourdes. The most famous religious shrine in the western world. The place where, in 1858, the Virgin Mary appeared before a peasant girl. Among countless thousands flocking to Lourdes in the hope of witnessing a divine manifestation there are many whose pilgrimage is a beautiful actress until blindness ended her career, Tikhanov, the Soviet minister who, on the verge of assuming the leadership, discovers the first signs of a terrible illness; Edith Moore, the one-time cancer victim whose return to the shrine will confirm the miracle of her cure. And now, in this very week, there is evidence that the Virgin is about to reappear to perform miracle cure. And there are doubters, too: the journalist looking for a sensational expose; the woman of science who tries to dissuade her sick fiance from his faith in the Virgin's powers; the Basque nationalist whose revolutionary plans are threatened by the hoped for miracle. But whatever their motives, however dramatically their lives become intertwined as the appointed day approaches, the same thoughts are CAN MIRACLE REALLY HAPPEN? About The Author: Irving Wallace was born in Chicago. His best-selling award-winning novels have been translated into numerous languages and have sold some 250 million copies around the world. He is considered one of the five most widely read authors of modern times."