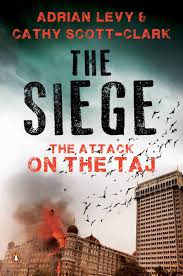 On 26 November 2008, four terrorists entered the Taj Mumbai and took over the hotel. What followed was nearly three days of terror as the world watched the great hotel go up in flames. Now comes the ultimate account of that attack. Telling the stories of guests, staff, police and the National Security Guard and piecing together transcripts of calls between the terrorists and their handlers. The Siege takes you right into the war zone, showing you what it was like to be in the Taj on those fateful days. Here are heart-stopping stories of guests and staff of a couple about to celebrate their wedding, a British-Cypriot shipping magnate whose state-of the art yacht is docked in front of the hotel and a young Taj employee who survives because of a stranger's phone call. Here too are revelations about the training of the terrorists, Headley's double game and the shocking incompetence of the Indian security forces. Terrifying, gripping and deeply moving.

A super-lead title 'this is not your ordinary thriller. This book is for real' Ahmed Rashid.
Levy and Scott-Clark bring to the table the almost forensic investigative skills and a robust reputation for ferreting out the forgotten secrets of our time, Caravan.